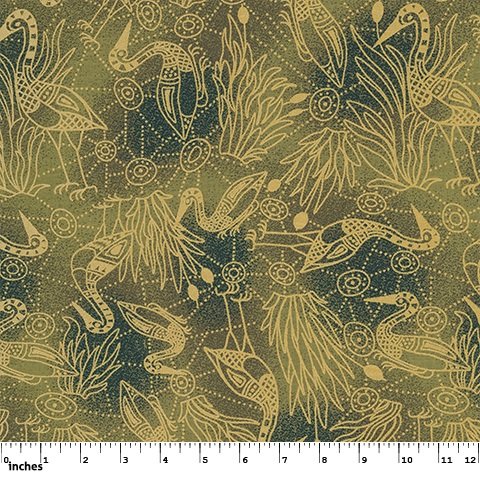 choose curbside pickup, or we will be glad to mail it to you!
Brolga Dreaming Green by Nambooka - Dreamtime:Â Brolga is the name of an amazing dancing bird, which belongs to the crane family. The Brolga's elaborate dancing performances are partly for their own pleasure and partly a mating ritual. Female brolgas are easily distinguished from their male counterparts by their trumpeting sound while dancing. Aboriginal people have immortalised their graceful steps through dancing. There are numerous Aboriginal legends around this amazing bird.Brolga was a beautiful girl and was obsessed with dancing. Once a romantic named Shaman, wanted her to be his wife. But brolga refused his proposal straight away. She loved dancing alone -nothing else! Sharman tried to marry Brolga in various ways, but never succeeded. Eventually Sharman convinced the supreme spirit to turn Brolga into smaller shape. Due to this intervention, Brolga became a bird. But, she became an excellent, tireless and elegant dancer, dancing with full devotion, spreading her dance; radiating joy and spontaneity. Her faultless creative expressions have inspired others to learn unique dance ever since.Nambooka is a well-known designer in the quilting world. Her designs are clear, colourful and very attractive.
Our SKU # 6119